EVERYBODY WANTS PEACE ON EARTH, the new holiday single from California country/rock band Mustangs of the West with its hooky, sing-a-long chorus and layered harmonies, will find its way into your head and heart this holiday season. 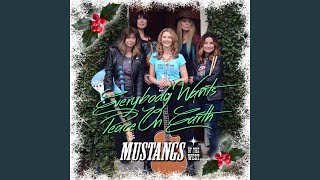 Everybody Wants Peace on Earth

EVERYBODY WANTS PEACE ON EARTH, the new holiday single from California country/rock band Mustangs of the West with its hooky, sing-a-long chorus and layered harmonies, will find its way into your head and heart this holiday season. https://www.youtube.com/watch?v=v0590FQdipU Written by band members

Written by band members Sherry Rayn Barnett, Holly Montgomery and Suzanna Spring, the song reminds us that peace begins at home, one voice can make a difference, and love still has the greatest reach. In the spirit of John Lennon and Yoko Ono’s “Happy Xmas (War Is Over)”, EVERYBODY WANTS PEACE ON EARTH is destined to become a new original traditional.

Lead guitarist Sherry Rayn Barnett talks about the song’s beginnings, “I had spoken with lead singer/acoustic guitarist Suzanna Spring previously about writing a song that would be global, a song of hope and positivity. By next morning, she had the chorus melody and some lyrics! Soon after, thanks to the label, we had a reason to finish the song. Blue Élan Records asked us if we’d like t be included in this year’s holiday album, we were excited to join our new label mates who had contributed in previous years. Knowing that the proceeds would benefit the Alliance for Children’s Rights made the opportunity all the more special. Bassist/vocalist Holly Montgomery flew to L.A. and we headed out to the high desert for some quiet time to write.”

Suzanna : “I was visiting Sherry and went running that morning. Tom Petty had recently passed away, and I was thinking about his life. During a run, a few lines of a chorus and a melody came into my head. When Sherry, Holly and I got together to look at this bit of a song, we wrote verses and finished it in one weekend. We knew it was for the holidays, and we also knew we had something that’s universal. We talked about a message for the season…and wrote something for any season, really. A reminder that we can start in our own neighborhoods, mend fences with out families and friends, and believe that for every good work there’s a ripple effect out in the wider world.”

George Landress co-produced the song with the band, working at Stagg Street Studios and at his private studio to finish out lead vocals. Fiddle player/vocalist Aubrey Richmond added her fiddle parts and co-arranged some beautiful layered background vocals, Barnett added her jangly electric 12-string signature sound, and the driving rhythm section of Holly’s bass along with drummer Suzanne Morissette gave this song its full dimension and drive. The song came together quickly, with harmonies and a sense of joy that listeners will take to heart and want to join in singing this season.

Listen to the song on Spotify, Amazon, Apple Music/iTunes (by clicking the option).