Roan Yellowthorn‘s new single, “I Started a Joke” is now available, marking the launch of her Bandcamp-exclusive covers project, Rediscovered. 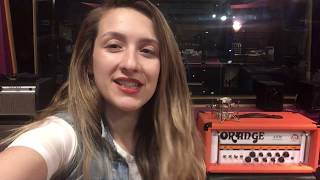 Out Now:”I Started a Joke” and Rediscovered!

Roan Yellowthorn's new single, “I Started a Joke” is now available, marking the launch of her Bandcamp-exclusive covers project, Rediscovered. https://youtu.be/Z_W7GCd6fvk   Here's what Roan Yellowthorn's Jackie had to say: Hi, everyone! A lot is happening right now and we are super psyched!! F

Here’s what Roan Yellowthorn‘s Jackie had to say:

A lot is happening right now and we are super psyched!! First off, we are in the studio right now making our second full-length studio album! And we’re making it with my dream producer, John Agnello. It’s been a long time in the making – I wrote most of the songs over the summer but some as long as a year and a half ago – and it feels so good to finally be recording them!

The next exciting thing is that I have a brand new single out today! My new studio album won’t come out for a little while so, to make the wait a little easier, we’re releasing a series of covers (I like to call them redis-covers) as part of my ‘Rediscovered’ series. The song that’s out today is ‘I Started A Joke’ – an early Bee Gees classic and it’s always been one of my very favorite songs. The emotion in it is so wrenching. We reinterpreted it in a super ethereal, moody, and melodic way with tons of layers of lush harmony and some really beautiful instrumentation. I think you’re going to love it just as much as I do. If you haven’t yet, follow me on Spotify so that you get the next single as well and so that you’re ready to get the new studio album when it comes out!

And the best thing is that the whole ‘Rediscovered’ project is available today! The full version has a ton of album-only songs that won’t be out anywhere else and you can get it exclusively on Bandcamp with a limited number of BEAUTIFUL physical copies available. I made all of the artwork for it by hand and I really love how it came out. The whole project is very close to my heart and I am really excited to share it with you. It’s a very special, one-of-a-kind album and everything about it was made with care and love. In fact, it’s funny that the project is called ‘Rediscovered’ because the process of making really helped me to rediscover my love of music.

Get the ‘Rediscovered’ album here: https://roanyellowthorn.bandcamp.com/album/rediscovered

Additionally, I’ve been putting more energy into my love of writing lately and I’m honored to be authoring a mini-column in Atwood Magazine to document the whole process of making our studio album! You’re going to want to read all about it – there’s tons of behind-the-scenes material there and a lot of interesting info about how an album is made, from pre-production to release. I hope you’ll come along with us on the journey (and let me know what you think!)

In other news, we are confirmed for SXSW! Our official showcase is on March 20th at Lambert’s BBQ in Austin, TX! Come on out! We are so excited about this not only because its our first official SXSW showcase but also because our lineup is phenomenal. Ahead of us is Mustangs of the West and Gina Sicilia and following us is Rod Melancon, Chelsea Williams, and Soul Asylum! Like, ‘Runaway Train’ Soul Asylum. Those guys! It’s going to be so amazing!

And, more imminently, we are playing Light Club Lamp Shop on 2/28 in Burlington, VT. It’s going to be tons of fun and a celebration in honor of completing the recording of our album. I hope you’ll join us! And, as always, thank you for all of the love and support. It means the world to me.