Rusty Young has re-recorded his #1 iconic hit-song, “Crazy Love”, and it is available now wherever you get music digitally. Listen Here. 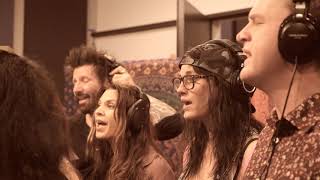 Rusty Young has re-recorded his #1 iconic hit-song, "Crazy Love", and it is available now wherever you get music digitally. Listen Here. https://youtu.be/C6-hHgQ7CvA A host of Blue Élan label-mates joined the veteran singer at Clear Lake Studios last December, following a label holiday celebration.

“Crazy Love” was included on the 11th Poco album, Legend, which was originally released in November of 1978. The album peaked at #14, the highest chart position that Poco has held. The album spent 52 weeks on the Billboard Album chart and the song itself reached #17 on the Billboard Top 100 with 14 weeks on that chart. It was also the #1 Adult Contemporary Song on Billboard in 1979 and spent 7 weeks in the #1 position on the AC chart, 21 weeks overall. It’s the highest charting Poco single (beating out “Heart of the Night” (#20) and “Call It Love” (#18)). It was the first Poco song to reach the top 40. It also charted in Canada (#15). Incidentally, the cover art for Legend was done by Phil Hartman, brother of Poco manager, John Hartman. As his day job, Phil worked as a graphic designer creating album covers for his brother’s clients while attempting to break out as a comic.

“Our motto at Blue Élan is that it’s about the Artist, it’s about the Music. It’s about Collaboration,” said Blue Élan co-founder Kirk Pasich. “With that in mind, I approached Rusty during our holiday party last year about recording a new version of ‘Crazy Love’, as a collaboration with several label mates and friends of the label. We had the studio at Clear lake blocked out the next day, and invited whoever was in town to stop by and contribute. The turnout was great and with the help of producer Dave Darling, they knocked it out in under an hour.” It was one of those magical moments — and I love how it turned out.”

“I was thrilled when Kirk approached me about doing a new version of ‘Crazy Love’,” added Rusty. “We had a blast in the studio and it was a memorable experience to see so much talent joining together on a song that changed my life. I hope people enjoy listening to it as much as I enjoyed doing it.”

The single follows the September 2017 release of Young’s first solo album over the course of his 50-year career, Waitin’ For The Sun. His solo album came after a five-decade career that began in 1967 when career that began in 1967 when Young was invited to play steel guitar on what would become the final album by Buffalo Springfield. Soon after, Rusty, Richie Furray, George Grantham, Randy Meisner, and Jim Messina formed beloved Americana band Poco. Over the next half century — and alongside bandmates that would also include Paul Cotton, Rick Lonow, Timothy B. Schmidt, and Jack Sundrud — he became not only the musical core of the band, but also the writer and/or vocalist behind hits, “Call It Love,” including “Rose of Cimarron” and the aforementioned #1 smash “Crazy Love.”

Poco, with Rusty Young, continue to tour this fall and winter. See the Tour Dates by CLICKING HERE.