Watch The “I Don’t Want To Hold UR Baby” Music Video, Premiering Live Today On YouTube

Scout Durwood has released a new song/video for “I Don’t Want To Hold UR Baby” from her forthcoming EP and video comedy series, Comedy Electronica Vol. 1, set to be released digitally on September 29. The catchy, hilarious video also premieres today on YouTube at 5:00 pm PT/ 8:00 pm ET. Click here to RSVP to the premiere: http://lnk.blueelanrecords.com/scoutdurwood-idontwanttoholdurbaby-yt

“’I Don’t Want to Hold UR Baby’ was conceived as a rant about all of my pet peeves, but as soon as I hit the first one, I was like… nope. There’s the whole song,” explains Scout. “We shot that music video at an amazing house in the hills on a day that was blisteringly hot, but because of our shooting schedule, no one got to get in the pool until right before sunset. By then the temperature had dropped, and the water was freezing. I put my dancers through hell, but they keep coming back to work with me!” 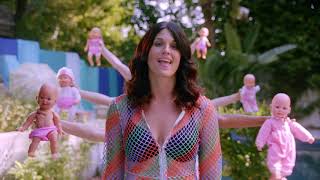 Scout Durwood – I Don’t Want To Hold UR Baby