Scout Durwood is set to release her second digital video series with an accompanying EP, Comedy Electronica Vol. 1. The EP will be released digitally on September 29, while the first Pride-focused single, “Steal UR Girlfriend,” debuts today on all digital platforms. The catchy, hilarious video also premieres today on YouTube at 5:00 pm PT/ 8:00 pm ET. Click here to RSVP to the premiere: http://lnk.blueelanrecords.com/scoutdurwood-stealurgirlfriend-yt

“Steal UR Girlfriend,” is a playfully humorous but all too accurate portrait of life as a lesbian. Explains Scout, “I’ve always been interested in gender roles and how we alter our behavior to mimic ‘masculine’ or ‘feminine’ roles, so of my three ‘bros’ in the video, one is a gay cis man and the other is non-binary. I love drag in all directions. Whenever I put makeup on, I consider it getting into drag even if it’s intended to make me look more like a girl. We shot the video in a day in a warehouse in Inglewood. Keva Walker did the choreography and was incredible to work with on set.” 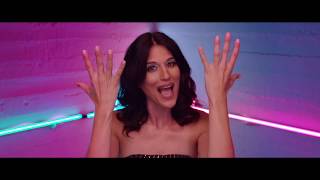